By Jatin Kamboj on January 29, 2017Comments Off on AAP releases photographs of Bikram Majithia with international druglord Satpreet Singh Satta 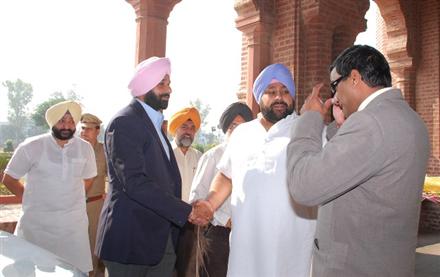 AMRITSAR : AAP State Legal Cell Head and party candidate from Majitha Himmat Singh Shergill released the photographs of Bikram Majithia with International Druglord Satpreet Singh Satta during a press conference held at Amritsar today. While interacting with the media persons, Shergill said that Aam Aadmi Party has always been vociferously speaking about the strong connections of Punjab Minister Bikram Majithia with the drug suppliers and this photograph is a corroborative evidence to prove this fact. Shergill said that while the other accused Bittu Aulakh has already admitted in his statement before the Enforcement Directorate that Majithia introduced Satta with Jagjit Chahal for supplying pseudoephedrine – synthetic drug and other raw material to him while Bikram Majithia has been denying the charges but these photographs have blown the lid and involvement of Bikram Majithia in drug trade stands exposed. Reading out the report of ED Shergill stated that Satta also acted as Majithia’s election agent in 2007 and stated in his house.
While challenging Majithia to give up his security cover and surrendering the passport, Shergill said that Majithia was scared to move about in the public without the security as he is well aware of his misdeeds and is well informed about the fury within the public for his contribution in ruining the lives of several youngsters of Punjab by patronizing drug trade in State in general, and this border belt in particular. Narrating his experience with the old lady who lost her only son due to drugs, Shergill said people will never forgive Bikram Majithia for his evil designs.Taking a jibe a Capt Amarinder Singh, Shergill said that Amarinder protected Bikram from CBI probe due to family relations and also did not utter a single word against him during the recent Congress rally in Majitha.Reiterating the statement of AAP National Convener Arvind Kejriwal, Shergill said that AAP has concrete evidence against Majithia and will put him in jail soon after forming the government in Punjab.