By akash upadhyay on April 27, 2022Comments Off on Akshay Kumar calls on fans to suggest names for new film alongside Radhika Madan

International megastar Akshay Kumar has invited his fans around the world to suggest a title name for his upcoming movie alongside Radhika Madan.

Akshay Kumar took to his official Instagram handle to share a video of his co-star Radhika Madan breaking a coconut. In the post, Akshay Kumar wrote: “With the auspicious coconut-breaking and a small prayer in our heart, we begin the filming of our yet untitled film which is about dreams and the power of it In case you’ll have any title suggestions, do share and of course your best wishes.” 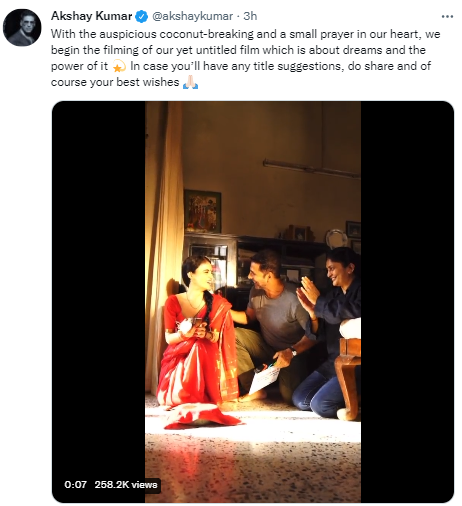 Akshay’s millions of fans around the world will now put their brain to the test to suggest the title name of the actor’s next smash hit, following the success of his latest movie Bachchhan Paandey.

With their on-screen chemistry instantly recognisable in the short clip, fans are eager to learn more about Akshay’s collaboration with Radhika for his latest project.