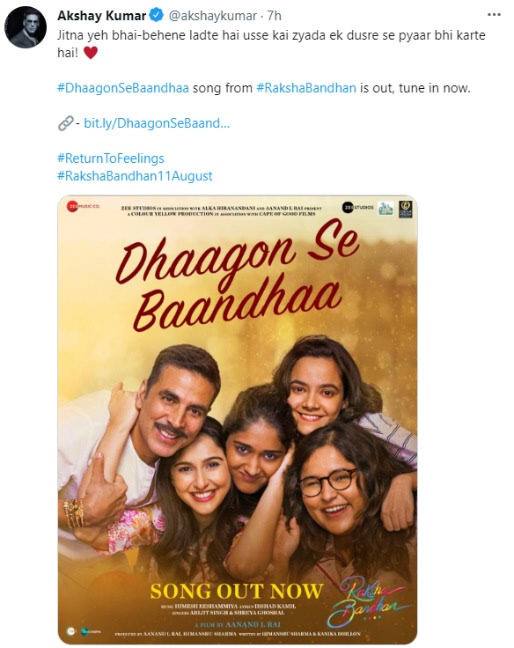 Akshay Kumar released a brand-new song from his upcoming movie Raksha Bandhan, a much-awaited family entertainer that narrates the beautiful bond between a brother and his 4 sisters.

As the releasing date is approaching, Akshay and the filmmaker Aanand L Rai announced the release of Dhaago Se Baandhaa on social media.

The song Dhaago Se Baandhaa depicts Akshay’s tender feelings upon his sister getting married. The visuals interweave flashbacks of brother-sister connection in their childhood into the present wedding ceremony, leaving both the family and fans in tears.

Dhaagon Se Baandhaa is sung by Arijit Singh and Shreya Ghoshal. It is composed by music director Himesh Reshammiya with lyrics by Irshad Kamil.

Several days ago, Akshay Kumar also shared a series of behind-the-scenes photos to celebrate “special moments of this very special film”. The heart-warming family bond in Akshay’s posts makes fans more excited to see the film on the big screen.

Raksha Bandhan movie is directed by Anand L Rai and is produced by the Aanand L. Rai, Alka Hiranandani under the Zee Studios, Colour Yellow Productions and Cape of Good Films banners. The movie is all set to hit the big screens on 11th August, 2022.

You can watch the official trailer here –   https://www.youtube.com/watch?v=gTxn44gL8zM