By akash upadhyay on May 10, 2022Comments Off on Official trailer for Akshay Kumar Starrer Prithviraj Releases ahead of June premiere 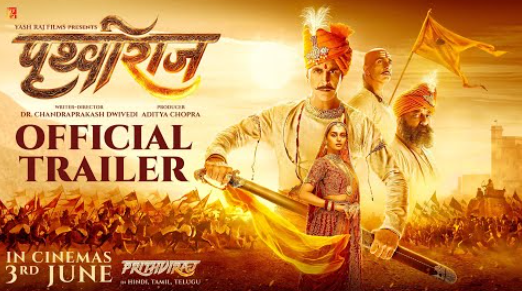 The official trailer has been unveiled for Prithviraj, the highly anticipated Yash Raj Films production starring international megastar Akshay Kumar. Akshay Kumar takes on the role of King Prithviraj Chauhan of the Chauhan dynasty as he takes on Muhammad Ghori of the Ghurid dynasty in The First Battle of Tarain. The film enters cinemas from the 3rd June.

Akshay, who stars alongside Manushi Chillar in her Bollywood debut. took to his social media accounts on Monday to share the trailer. He wrote, “Shaurya aur veerta ki amar kahaani. Ye hai kahaani Samrat Prithviraj Chauhan Ki (this is story of Prithviraj Chauhan) Releasing in Hindi, Tamil and Telugu. Celebrate Samrat #Prithviraj Chauhan with #YRF50 only at a theatre near you on 3rd June.”

Prithviraj is based on Prithviraj Raso, a Braj Bhasha epic poem about the life of Prithviraj Chauhan and also stars Sakshi Tanwar, Ashutosh  and Lalit Tiwari in pivotal roles.

You can watch the official trailer here –   https://www.youtube.com/watch?v=33-CQdPHyjw